I tried it again.  Final Cut Pro X, Apple’s oops of a slap in the face to professional editors and post production workers – especially those who depend on collaborative workflows. One of the basic phases of post production is audio mixing.  As a former audio engineer, this is my comfort zone.  In normal NLEs (non-linear editors), you can export the audio tracks, then bring them in to a DAW (a Digital Audio Workstation) for mixing and sweetening.  In narrative film work, you might also re-record some dialogue (automatic dialogue replacement, or ADR), or record Foley (like footsteps and door slams).  This workflow would be something like:

This worked for other NLEs – all Avids, but also Grass Valley, or Lightworks, or Final Cut Pro.  And it worked for any DAW, including Logic, Nuendo, or even programs like Cubase or Sonar.  Even as Final Cut Pro 7 made inroads in film and video production, round tripping to Pro Tools remained a standard workflow. Until X.  Final Cut Pro X broke many things, but especially important was the nearly complete loss of any way to roundtrip audio.

Logo from the X2Pro web site

Now, as FCP-X has “matured” [and Apple has slowly replaced basic professional features that had been present in the still often used FCP-7], a separate vendor has made a companion application to facilitate audio post: X2Pro by Marquis Broadcast.  X2Pro lets you export an AAF file, which you can then bring in to ProTools (or another DAW) for audio post production.  But it costs a little – $150.  Not very much for professional software, but a bit of a barrier for the broke independent filmmaker. 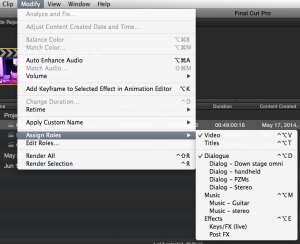 Well, turns out you can manage it from FCP-X alone.  Basically, you assign a unique role (or sub role) to each “track” that you want Final Cut Pro X to export.  Then, using the File – Share – Master File… command, and selecting export roles as separate files, you can export a bunch of independent audio files, either WAV or AIFF. The project was a multicam shoot of a school play.  Three cameras, plus ten channels of audio recorded through a Mackie Onyx 1620i mixer via a firewire to Thunderbird adapter cable to a Mac Book Pro and Logic Pro X.  Last year, we recorded to Pro Tools using the same setup, except 14 channels.  In both cases, worked like a champ, glitch free.   Final Cut Pro X had no trouble syncing up the audio and video clips into a MultiCam clip. The easy way would have been to just edit the soundtrack, without ever going into the NLE (Final Cut Pro X) until you flew in the final mix.  For a show like this, that would work pretty well – unless you planned to be sophisticated, and vary the sound depending on which camera angle was on.  For example, a little more reverby for the long, master shot from the balcony, and a little more present for the closeups…  So I exported from the final project.  Here are the high points of the work flow:

If you have a complex edit with many little clips, this won’t work, right?  Because the process doesn’t seem to easily export the timeline-less timeline’s timecode.  Dang!  Would it be that hard?  For this project, it worked well, since I had multitrack audio of a performance to mix.  The timecode still would have helped – for instance, I had to manually sync the video file as a reference. 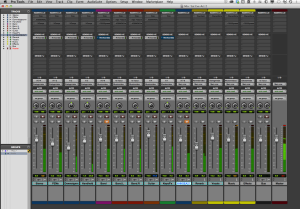 After mixing and sweetening in ProTools, I sent out a stereo file, imported that into Final Cut Pro, and all was good.  I replaced the audio in the multicam clip, although you could also make a new multicam clip, I guess…

Any feedback on X2Pro?  Hasn’t had an update in a year or so…